The coppa has an ancient tradition, and take its name from the back part of the pork. There is news of pork farms in Piacenza since Roman times. The first testimony is a pendant kept in the Civic Museum of Piacenza, depicting a small pig, whose paws close to the ring and probably consists of a kind of amulet to be attached to the neck. The mosaic of the 12th century in the Abbey of San Colombano in Bobbio, depicts the sacred ritual of slaughtering the pig and a similar representation is kept in the crypt of the church of San Savino in Piacenza.

The production area of Coppa Piacentina PDO includes the entire territory of the Piacenza’s province.

Processing of meat – coming from pigs born and raised in the regions of Emilia Romagna and Lombardy – involves the addition of salt and a mixture of spices and other natural aromas, which are absorbed through a massage technique. Later, the product is coated with a natural pigskin and tightened by a ligature. The aging phase takes place in controlled temperature and humidity areas. There are necessary at least six months for maturating the characteristic texture and aroma of the coppa. The coppa consists mainly of lean meats with some fat (less presence). It has slightly cylindrical shape.

It has compact, homogeneous and red slices, with white color tending to rosy. The taste is sweet and delicate. It is usually accompanied with hard bread pastry. Coppa Piacentina PDO is excellent at every occasion, from breakfast to the main meal. It is usually cut into thin slices; perfect with bread.

In Piacenza, there is every year the “Coppa d’oro” prize for the valorization of quality of Piacenza foods. 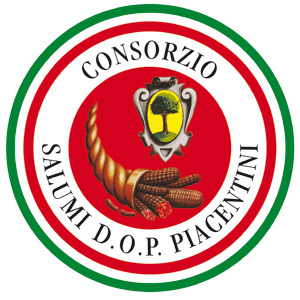