is a project co-funded by the European Community and promoted by the Consorzio per la Tutela dell’ASTI Docg, by Istituto Valorizzazione Salumi Italiani – IVSI (Institute for the valorization of Italian deli meats), and the Consorzio Tutela Provolone Valpadana.

The projects last for three years and events are scheduled to be held in the United States.

The “Consorzio per la Tutela dell’ASTI” (Consortium for the Protection of ASTI wines) was officially founded on 17th December 1932 and recognized in 1934. It was originally called “Consorzio per la Difesa dei Vini Tipici MOSCATO d’ASTI  Spumante and ASTI Spumante” (Consortium for the Protection of Typical MOSCATO d’ASTI  Spumante and ASTI Spumante wines). Its trademark has always been the patron saint of Asti, Saint Secundus, on horseback. The Consorzio works to protect, develop and promote Asti and Moscato d’Asti in Italy and worldwide.

The Consorzio’s role also includes quality control along the entire production chain and monitoring the use of the designation name to prevent counterfeiting. Its Research Laboratory promotes and coordinates specific scientific studies and innovative technologies to continuously improve the production process as a whole.

The Consorzio coordinates and promotes activities valorizing the area of origin of Moscato Bianco grapes, whose cultivation covers 10,000 hectares across 52 municipalities of the provinces of Alessandria, Asti, and Cuneo. More than 1,400 ha have a gradient over 40%, with 330 ha of this area over 50% – these are vineyards historically named “sorì“, where no mechanical equipment can be used and vines are tended exclusively by hand.

Asti Spumante is also the name of one of the five Core Zones of the vineyard landscapes of Langhe-Roero and Monferrato, a UNESCO World Heritage site.

In February 2012 the Consorzio received an important recognition from the Italian Ministry of Agricultural, Food and Forestry Policies (Ministerial Decree no. 1778 dated 27th January 2012), becoming the only agency entrusted with essential functions envisaged under the legislation governing the production of protected wines, namely:

•  provide technical assistance, draw up study proposals and business and economic assessments to enhance the value of the Designation;

•  protect and safeguard the Designation from violations, unfair competition, and wine fraud;

•  carry out activities involving protection, promotion, consumer information and general protection of the interests of the Designation on behalf of all the members included in the Designation surveillance systems;

•  implement supply control policies to improve the coordination of market access for the Designation, after consulting the industry representatives;

•  act in administrative and judicial courts, in Italy and abroad, to protect and safeguard the Designation and to protect the interests and rights of the producers;

The Istituto Valorizzazione Salumi Italiani – IVSI (Institute for the valorization of Italian deli meats) is a voluntary Consortium, non-profit organization. It was formed in 1985 in response to the growing need for information from consumers and with the aim of enhancing the image of Italian deli meats.

The Institute has become a reference point as well as a valuable source of information for journalists and opinion leaders. In this context, the “Reporter del Gusto” Press Award is of growing interest.

IVSI carries out the following objectives:

•  spreads knowledge on the various aspects of Italian Salumi – economic, nutritional and cultural – both in Italy and abroad, promoting the unique heritage
of Made in Italy food products;

• promotes research on nutritional profiles of Italian Salumi and, is active in communicating the relevant results to the general public, together with the Institutions which are involved in nutritional education;

• support training activity to spread Salumi culture and its history in Italy and abroad.

The Consortium is not for profit and carries out the following activities:

• protecting and monitoring the production and sale of the Protected Designation of Origin Provolone Valpadana cheese and the use of its name;

• promoting any useful initiative to preserve it uniqueness and special characteristics from abuse, unfair competition, counterfeiting, misuse and all other conduct prohibited by law;

• raising awareness about the Protected Designation of Origin Provolone Valpadana cheese in all marketplaces;

• taking care of the general interests of the Protected Designation of Origin Provolone Valpadana cheese;

• carrying out development and research activities in order to encourage the continued improvement of production techniques and consequent improvement in quality;

• organising and overseeing the proper conduct of training activities;

PDO/PGI:
THE TWO ACRONYMS OF VALUE

To protect the uniqueness of certain food products, the European Union has launched a specific legislation, establishing two levels of recognition: PDO and PGI, with which it aims to protect the products’ names and their typical qualities from imitations and abuses.

The PDO and PGI products represent a great asset for Europe thanks to their consolidated production tradition, the high-quality standards, the connection with the region of origin and the cultural and business structure to which they belong. Who makes PDO products must adhere to strict production rules set out in the specification. The respect of these rules is guaranteed by a specific independent control body.

These Community marks are a guarantee for the consumer, who knows to buy quality food produced respecting strict specifications.

Who makes PDO and PGI products must adhere to strict rules set out in the Production Regulation and the respect of these rules is guaranteed by a specific independent control body. 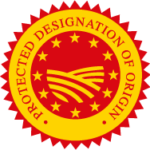 PDO – Protected Designation of Origin is a European mark of origin which is attributed to those foods whose peculiar characteristics depend mostly on the territory where they are produced. To obtain a PDO product, the stages of production, processing, and preparation must take place in a defined geographical area. These important factors allow obtaining a unique product impossible to imitate outside of that particular area of production. 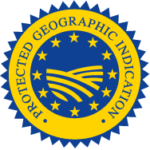 PGI – Protected Geographical Indication indicates a European mark of origin that is recognized to those food products for which the specific quality, reputation or other characteristics are strictly dependent on the ability of production, processing, and preparation developed in a specific geographic area. To obtain the PGI, therefore, at least one stage of the production process must occur in a particular area.

THE PYRAMID OF ITALIAN WINES 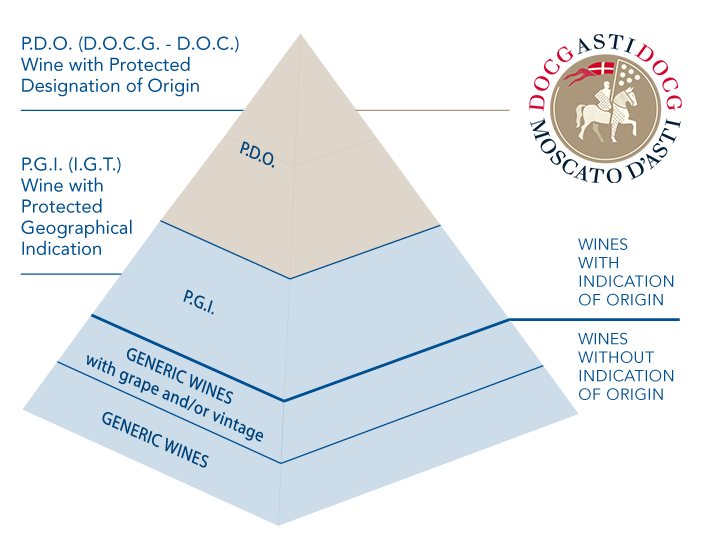 ASTI and MOSCATO d’ASTI are two Wines with Controlled and Guaranteed Designation of Origin. The PDO symbol indicates the name of a region, of a specific place or, in exceptional cases, of a country to indicate a wine originating in that area whose quality or characteristics come mostly or exclusively from the geographic environment including natural and human factors. The grapes from which PDO wine is obtained, are 100% produced and processed in its delimited geographical area.

It indicates the name of a region, a specific place or, in exceptional cases, a country which is used to indicate a wine originating in that area. The quality, the reputation or other features can be attributed to the geographical origin. The grapes from which the PGI wine is obtained, originate for at least 85% exclusively from this geographic area.

For PGI wines, the delimitation of the vinification area of grapes has been introduced: this means that it will no longer be possible to produce PGI wines from grapes harvested in a region but vinified in another one (except for the 15% of the grapes that may come from outside). Moreover, the PGI wines will be subject to more stringent control procedures.